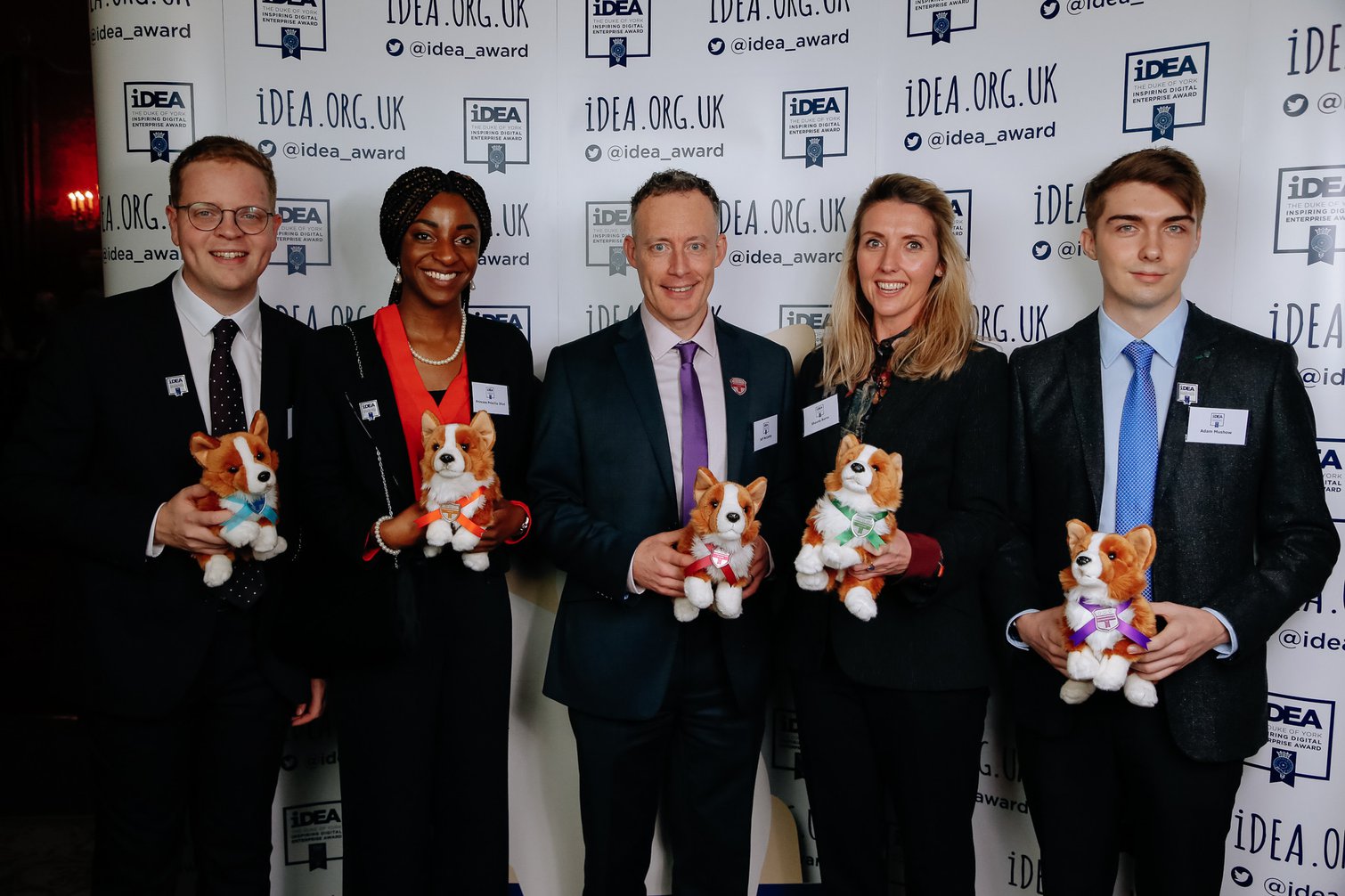 The goal was not to look at using iDEA for just one department or faculty but to ensure the advantages were realised across the entire university community.

The Inspiring Digital Enterprise Award (iDEA) is a free, international online programme that helps individuals to develop digital, enterprise and employability skills. Participants engage in a series of online challenges to gain badges that lead to industry-recognised awards. Jisc has worked in collaboration with iDEA to include relevant modules within the discovery tool resources collection.

Senior lecturer, Jeff McCarthy, and careers adviser, Shauna Burns, started championing iDEA at Manchester Metropolitan University (Manchester Met), as a way of encouraging students and staff to develop digital skills and confidence. They recognised the scheme as being of benefit to all those that the university represents and interacts with. The wide variety of badges caters for all interests and can be achieved at Bronze (beginner) or Silver (intermediate) levels. Gold level badges are also being developed.

Initially there was no formal engagement plan and growth in uptake was organic – it was more a case of sharing and promoting the scheme and keeping momentum going. After one of the iDEA partners sent details of the scheme to the pro-vice-chancellor, Jeff investigated the award in more detail. He identified that it would add to the student experience and align with the new education strategy which has a student-centred curriculum and a strong focus on employability. Jeff, Shauna, a final year student and a graduate explored iDEA and liked the ethos it fostered and the way it was presented. This paved the way for Jeff pitching and ultimately gaining, senior university stakeholder approval to roll iDEA out across the entire university. He wrote and presented a proposal to the pro-vice-chancellor, with a recommendation that it be rolled out across the university and an implementation plan. On gaining approval to proceed, Jeff engaged with iDEA, iDEA partner Wakelet and Shauna Burns to help with launch. The timescale from Jeff becoming aware of iDEA to launch was four months.

Roll out was organic rather than structured. It was felt that it was more important to gain some early momentum and to use that as the catalyst for further promotion. Jeff and Shauna introduced students and staff to iDEA at every opportunity. While students were the prime target audience, Jeff and Shauna also encouraged staff to get involved by running workshops and inspiring tutors, programme and course leaders to build it into induction activities. Shauna was instrumental in encouraging uptake across other faculties and in engaging fellow careers advisers.

Jeff shared the early successes of the roll out with senior stakeholders and iDEA, using this to gain further marketing support such as use of screen displays, showcase videos shared across the campus, pull up banners and celebration events to promote the scheme.

Employer engagement has been another important aspect of the roll out of the scheme. Manchester is home to one of the largest digital creative and technology centres in Europe. Local employers and charities have been invited to attend award ceremonies to celebrate iDEA award achievements. Some have also expressed an interest in using iDEA to support their own staff.

The award is a useful tool to share with students in one-to-one interviews when they are looking for extra opportunities to boost their career potential. We work with a number of digital and tech businesses within the region – iDEA helps students articulate their digital skills and abilities as future talent.

iDEA is accessible, flexible and scalable: 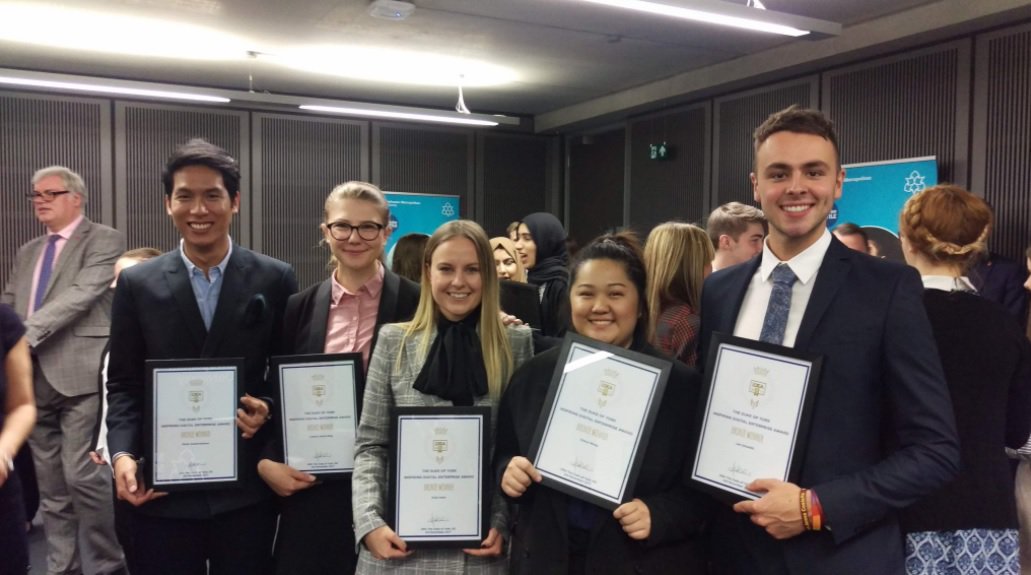 There has been a real groundswell in engagement with large volumes of students and staff taking part in the two years since launch. At December 2019 over 1,429 participants at Manchester Met had registered for the scheme and had completed over 14,896 badges. 208 participants had achieved the bronze award and 102 achieved silver … and the numbers continue to grow!

To date Manchester Met have held four iDEA celebration events to celebrate the achievements of those who have gained Bronze and Silver Awards. These events really highlighted diverse community engagement in iDEA across all faculties.

iDEA has a wide-reaching breadth and appeal: Shauna and Jeff both work within the faculty of business and law but have also shared the scheme with six other faculties.

iDEA supports diverse needs and ambitions – some students use it to develop and expand their existing knowledge, others use it to gain experience in digital and enterprise which might be outside their programme of study.

The iDEA organiser management system allows centre organisers to track learner progress. The system is optimised for use on different devices and is easy to use

iDEA is now included in Manchester Met’s Third Term Programme, an initiative which offers students an opportunity to tailor their studies and get involved in a wide range of experiences. This adds value to the overall student experience by helping students to learn new skills, earn credits towards their degree and shape their future careers. The iDEA team have worked with Manchester Met’s staff to develop a customised and branded badge specific to their Future Skills Award.

We were the first university to roll it out across the entire university. iDEA is now a key component in our student-centred curriculum. It helps to build confidence and employability skills and offers flexible and tailored study to meet individual ambitions. It supports student engagement and facilitates diversity.

Jeff’s clear recommendation is to start organically rather than waiting to formally embed iDEA into units before launch. Formal integration can and will follow, based on visible and tangible early successes.

Promoting and implementing the scheme in a more formal sense has taken time but the staff involved feel the employability benefits make it worth the effort.

The integration and embedding of iDEA within the Future Skills Award and the Third Term Programme has established a foundation from which the initiative will continue to move forward.

iDEA is easily integrated into other activities – it is very scalable and is constantly evolving with more badges coming on stream all the time at no extra cost or resource. The Gold award will provide a next level of stretch and challenge, providing real opportunities for integration of iDEA projects into the student curriculum.

Jeff and Shauna plan to encourage other careers staff to work with their faculty teams to build iDEA into induction and programme activities. They also plan to use the awards events to develop involvement from employers and external communities.

In addition, a five-week social media campaign will take place during spring/summer 2020. This will feature student and staff case studies shared via the careers website as well as video extracts and images from the celebration events.

Jeff is also leading a community of educators at other universities and colleges, sharing best practice and helping them to introduce and roll out iDEA to their communities.

Navigate to a section

Digital capabilities: making it easy for people to develop their digital skills

Enhancing the digital experience for staff and students